Guest Blog: Out of the Labyrinth by Lesley Mason

In the quiet of the cloister voices echo

Footsteps through the passage of time

In the garth an old lady carries her bags

Easing through the labyrinthine wind

I first came across the idea of writing a labyrinth through Jackee Holder’s “Paper Therapy” course.  The exercise involves writing a problem on a labyrinth grid, starting from the outside and working to the centre, in as much detail as you can, pausing at the centre to receive what insight emerges and capturing that as you write your way back out.   I didn’t do the exercise.  I had no burning issues at the time, but to be honest it simply didn’t resonate with me.

I didn’t like the idea and couldn’t imagine using it.   I ditched it and went on with the rest of the course.

Walking through the City a few weeks later, I thought the Cathedral cloister would be a quiet, calm and above all cool place to sit and scribble for a while.   Sitting in the shadows, I was taken by a woman who seemed to be wandering aimlessly in the middle of the quad, clutching her shopping bags. She seemed sad, but soon I realised I was watching a meditation. 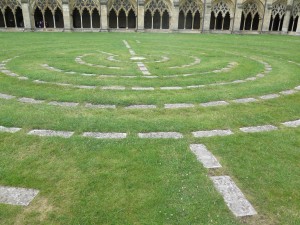 Given the work-generated negativity that I was disgorging into my book, I thought: well, why not?  After she had left, I dropped my own bag on the grass and stepped into the labyrinth.

Ignoring the writing exercise instructions I didn’t dwell or dig into details.  I hardly even put words around my struggle with ‘letting go’ in order to move forward. I simply held the idea lightly in my mind as I walked to centre. In the middle, I didn’t stop to think, but simply circled the centre stone and asked for – not an answer, not a certainty, just a bit of guidance, a little support, a prompt.   And I walked slowly out along the pathways with an open mind.

The answer, when it came, did come in words: You are trying to push the river.  Let it go and it will still flow.  Stop trying to force timescales, that will be counter-productive.  Allow everything to unfold in its own time.  Be gentle – not just with yourself, but with everyone else.  Being bold does not require you to be harsh.  Standing back, is not the same as turning your back. For all time is short, a heady rush is not the way. Let it slow.  Let it flow.

Did I “hear” them? Did I think them?  Whether they came from within or without doesn’t much matter.

I was so intrigued by the experience, that I went back a week or so later: this time to walk it barefoot.  I’d love to give some in depth esoteric reason for that – but basically, I spend a lot of my time barefoot, probably because I was brought up not to – so it just felt like the thing to do. This time it wasn’t about seeking guidance, but about trying to understand how the meditation works.

Firstly, it is a slow walk.  I think of mediaeval monks processing round the cloister – I almost want to hear a Gregorian chant – and try to set my pace to what I imagine that might have been. Then I simply focus on the path.

Labyrinths are made in different ways.  The Norwich Cathedral one is marked out by stones, but the path itself is in the green.  It’s almost designed to encourage that bare sole (!) connection to the earth.

This is what I discovered…

The path turns and seems to draw you away from the centre before turning again.  Trust in the design, go with the flow, you will be inexorably guided to the centre: the anchor point.

There, there is nothing but yourself. A stone tablet in the grass to be circled, to hold you to your own centre while you gather understanding.

And then you walk the path again, only it’s not the same path, for all it still bears your footprints.  This is not a retreat to your starting point, but an adventuring forth from your anchor, the rock that will always be there now that you’ve found it. The path twists and turns taking you close back to your centre, reassuring, but gently leading you equally inexorably out into the world, until the gateway is reached, the guided path falls away and the vast potential of unguarded openness is available to you.

The sense of peace obtained from this second walk is hard to describe.  I think I set out to understand how the first one had “worked” – maybe I was putting it to the test in a way.  Was it just some kind of fluke?  What I found was that of course it was.  It was the fluke of realising that I know who I am and what my purpose is, but I need a ritual to quieten me down to listen to myself.  The fluke of finally internalising the belief that if I want guidance from the universe I have to shut up long enough to hear her quiet whispers.

I have learnt that I although I am now certain of my centre, I won’t always be moving towards my purpose.  Sometimes the path will seem to move in the opposite direction. I have learnt that sometimes I will need to draw back to the security of my anchor.  They say ships are safe in harbour, but that’s not what ships are built for.  I heartily endorse that – but ships do still need safe harbours.  I’m beginning to think I might always find mine by walking slowly, and possibly barefoot, through a symbolic artificial pathway, sacred only because we choose to make it so.

Click here to find out more about Lesley Mason