How To Start Writing and Stay Writing 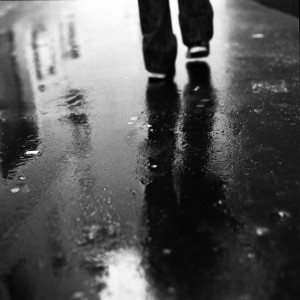 This morning despite the pouring rain I set off on my morning walk. I did look like I was dressed for the North Pole with two hoodies on tied up as far up my neck as possible.

The rain was heavy and the walk was a soggy plod up the hill and then onto the main road as I walked the route that would take me around 50 minutes back home.

Whilst walking I got lost in my thoughts and one of those thoughts was how often I don’t feel like writing and that it regularly feels sluggish and slow and doesn’t make much sense. A bit like how I was feeling in the rain this morning. But once I got into my stride, despite the rain pelting down I began to not even feel or notice the rain.

Instead I became more aware of my environment. My nose tingled at the woody scent of the man’s aftershave who walked past me at the bus stop. I began turning over a difficult personal challenge I need to try and resolve between family members and I smiled at the numbers of people I passed without coats, jackets or an umbrella in sight who I guess have some secret weather forecast that the rest of us know nothing about.

Sometimes writing feels awkward and clumsy to begin with. You definitely don’t feel like doing it but you hit the page anyway. But even then nothing you write seems to make much sense but you keep going and then at some point often when you least expect it you hit a word or sentence or maybe an idea that contains a seed of something, that leads to another thought or idea. And like I experienced on my walk this morning you start to loosen up.

About ten minutes into my walk I unzipped one of my hoodies. I’d started getting hot and my pace quickened. At the same time without any deliberate effort I came up with an idea for the family dilemma. I’d found a groove despite the rain and the damp weather.

For years writers have been telling us that rough drafts work. Rough drafts get us going as choreographer Twyla Tharp commented on in her book, The Creative Habit, “Starting is not the same as beginning.” But too often we’re over ruled by the cultural pressure that sends out the message that from the word go we somehow need to be perfect on the page, first time round. We stress ourselves out by believing that those first rough drafts need to arrive on the page as polished pieces. Nothing could be further from the truth.

Messy, incoherent writing is often what gets us going and is the place we start from that will eventually if we persevere and stay with it that leads to a finished article, that post for your blog, the first chapter of a novel or short story, the report for work or an entry in your journal or notebook.

If you’d like some support with how to get going with your writing, or how to stay with it then over the summer there’s opportunities to attend the following workshops with me where I will share tips and techniques for getting starting and staying on the page.

On 24th July I’ll be leading an evening workshop entitled from Zero To Hero click here for more details: https://www.eventbrite.co.uk/e/from-zero-to-hero-how-to-start-writing-with-confidence-with-jackee-holder-tickets-12164637759?ref=estw

On August 8th I’ll be in Oxford leading a Paper Therapy workshop at the Wilderness Festival http://www.wildernessfestival.com/programme/now-live-events/ One on one slots with me are also available at the festival.

Today’s guest post is the second post from Janet Limb who joined me this week on the Inside Out Writers Retreat here on Kalikalos, Greece. In this post she tells of meeting with her writing hero, Elizabeth Gilbert. They hit off when Liz comments on the blue mascara she’s wearing. 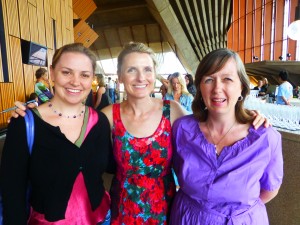 The face staring down at me from the poster looked strangely familiar. My mind was blank as I walked towards it, someone I went to school with perhaps? I teach evening classes, so an ex student? The inviting, smiley face was getting closer; blond hair loosely tied back; a casual pose, head leaning to one side; this woman looked really at peace with herself.

I had my gap year a little late at aged 48 to be precise. Marriage and children had passed me by and I hated my job at the NHS so the answer seemed simple, pack it all in and go off travelling.  This is your ‘Eat, Pray, Love’ year a friend joked.

Sydney was breathtaking and ignited my fire again for exploring cities. I stayed with a friend in the suburbs and caught the train into work with her on my first day sightseeing.

I walked from the train station alongside the beautiful Hyde Park and following my nose turned left, dropping down some steep steps and into the world famous Sydney Harbour. I did actually gasp, as it was so beautiful. I felt like I was on a movie set and fate had given me the perfect day, sunny, not too hot with deep blue skies.

A stream of yachts and boats drifting like froth on the water, gorgeous little cafes and restaurants skimming the harbour, a healthy hustle & bustle of tourists and business people.

The opera house, striking against the Sydney skyline, the outline of a sailboat.  I returned to this spot again and again over the next few days mesmerised.

I walked all around the opera house and it was along one of the walkways that I saw Elizabeth Gilbert staring down at me from a poster. I knew then I had to get tickets to her talk for my Sydney friend and me.

The event was seven years after the publication of Eat, Pray, and Love. Would she have lost her motivation to do anything else I wondered? Now married, wealthy, played in the film by Julia Roberts (no less) maybe her mojo had gone? I hoped for someone inspiring and I was not disappointed.

Witty, funny, self-depreciating, humble, modest, all words I would use to describe Elizabeth Gilbert. I saw no hint of ‘superstar’, she was so refreshing normal and down-to-earth. She laughed and joked.

When asked what keeps her awake at night she replied that in her early forties she had to accept that her best work  (Eat Pray Love) may be behind her  (what a problem to have we all thought).

She told us she became a writer because that’s what she had always wanted to do and because she can’t do anything else. She told her funny story of being on ‘Oprah’ for the first time and saying something dumb to the great woman. Self consciously trying to make conversation during the commercial break she told Oprah that her shoes were from Paris, and then emphasised that Paris is in France. ‘Really’ was the sarcastic reply from Oprah.

The most interesting thing was she was remarkably frank about her writing journey, which for an aspiring writer like me was just gold dust.  She told us the story of her struggle, yes readers – Elizabeth Gilbert ‘struggled’ with her first book.

She told us how it was tortuous to try and write a novel and after sixty pages she ‘gave up’, put the manuscript into a drawer and forgot about it. The next phrase she uttered has become my mantra.  She told herself ‘I am not going to be the sort of person who dies with sixty pages of a novel in the drawer unfinished’.

As a result anytime I’m struggling with something, I say this to myself, ‘Janet, do you want to be the sort of person who dies without (insert thing I am struggling with) going to the Holy land, learning more about astrology, writing that article/ short story/ blog?

The end of Elizabeth’s struggle story is a happy one. She finished her first novel ‘Stern Men.’ It is published and after two other novels she writes the mega ‘Eat Pray Love.’ The rest as they say is history.

After the talk she invites us not to the usual ‘book signing’ in the foyer, we are told that Elizabeth Gilbert will be meeting people in the foyer. What an invitation I thought. My friend frowned when we saw the queue and questioned wearily ‘really Janet?’ I knew I had to stay and I’m so glad that I did. We were the last two people to meet Liz (I feel we are on first name terms now).

She didn’t appear worn down by all the same sort of questions that people asked ‘How are you and Felipe (the man she marries)?’

I asked simply if we could have our photos taken with her and we did.  Liz admired my dress  (a new shirt dress purchased in a discount store in Sydney for a bargain $20) as we stood side by side she glanced at my eyes and she complemented me on my violet mascara which she said made my eyes look so pretty.  I told her I love colours after having my colours ‘done’ 12 years ago and she said it showed (ah). Such a down to earth conversation from such a famous woman.  Liz Gilbert likes my mascara!! – Hope she likes my first book! 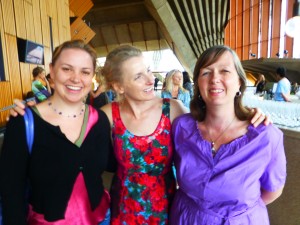 Above my desk now is a card, which boldly states ‘I forgive myself’